“Rabbits? Why rabbits?” I ask the young painter Tina Oelker, when I visit her in her Loft-cum-Atleier in Hamburg near the fair ground. “The structure and characteristics of the animals interest me” she says: “They are wild and free, fast and fascinating. One cannot catch them so easily and they can´t be domesticated. I take them into the city, for the city dwellers. My collectors hunt them down, so to speak. They are so out of touch with the wildlife, that some of them want to have them in their homes.”
The atelier´s walls are covered with rabbits in every shape and colour, and Tina Oelker variates them with the ease of a coloratura soprano would do with her arias. She wants to paint exactly 1000 of them and has 195 so far. It´s an ongoing project and one of them is in the stage of being created on her easel in her rooms. She opens the door in her painter´s outfit, sprinkled with paint and instantly offers a wonderful strong espresso. Her last exhibit was in a fashionable Italian restaurant, where her boyfriend Manuel Alec Klein, a promising actor who currently is on stage in Münster and Bonn, sang some chansons for the evening.

The german painter, Tina Oelker was born on the 7th of Dec. in 1973 in Westfalia and is now living and working Hamburg. At the age of 15-19 she studied Modern Art in her home town Hamm. During her studies she met the Italian (Avandgarde) Artist, Federico Schiaffino, who inspired her work, invited her to Portofino and exhibited her work. After her graduation in 1994 Tina Oelker moved to New York, to study Fine Art at the Art Students League and childrenbook illustration at S.V.A. Back in Germany she directly started to exhibit and held several live-painting performances. From 1997-2004 she studied Design at the University HHW in Hamburg. During that time she became one of the most present artists and curators in Hamburg. In 2004 she finished her project, “Durchgang” (producer gallery) and concentrated intensively on her paintings. Tina is currently presenting herself with her project, “1ooo Hares – limited edition” and her hunting motives. “Her large oil paintings (200 x 200 cm) show pestering restlessness and vehemence, emotions spread out directly and naked. She intends to provoke the viewers emotions, not to say she attacks them. Tina Oelker doesn´t go easy on emotions and even less her own (…), the cultural journalist Beate Naß, said 2007 in her exhibition speech: “Her work is full of vitality, a process of passionate painting between laughs and tears.
Since spring 2008 she lives and works together with her singer/actor boyfriend with whom she also produced and shot her short movies, “Zu Tisch”/ “being at table” where she catches on with her last hunting motives. It gives a clue of Tina Oelker´s direct, powerful and humorous association with her perception of the hunt, wild deer, human beings, sex, birth, death, and life itself. “Life is continuity” instead of “life is suffering” is her motto for her current work. She perceives herself as persistent and honest in her work and at the same time hopes to remain absolutely open minded for the ongoing change of existence itself. Her current presence in New York City can be seen as a little hunt for fame and recognition. “Tally ho!” one might add. 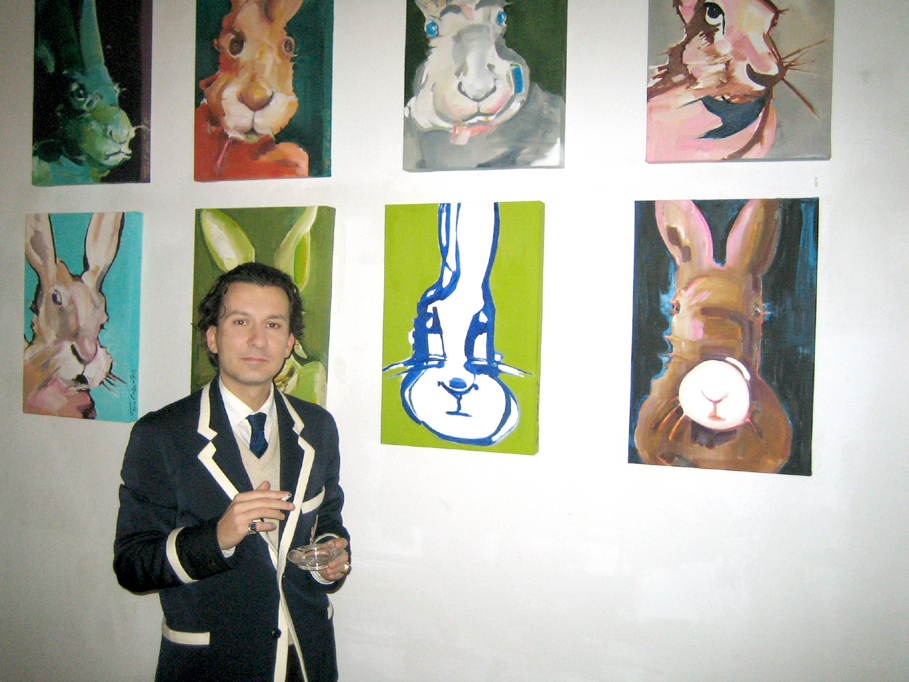